Our trip to Dubai in early December was short, but well worth it! We arrived on a Friday, left on a Monday, but took in a few of the key sights along the way! Dubai certainly is a place of grand opulence and engineering marvels. It is incredible how they were able to build such a city in this location – a desert with limited freshwater.

During our stay in Dubai we could only visit a couple of places, as it is actually very large, and takes a long time to move around. Luckily, we had a local guide! Colin, a friend of ours who often works in the area was kind enough to spend a day with us and show us around Dubai! Thanks again Colin! We visited the Dubai Mall, one of the largest malls in the world, if not the largest. We saw the aquarium in the mall, along with the rink, the huge waterfall wall, and of course the fountain light/water show with the Burj Kalifa in the background – the tallest building in the world (for now!). There were what seemed like thousands of stores spread out over at least 4 or more levels. Also, their food court was more of a food mall in itself. 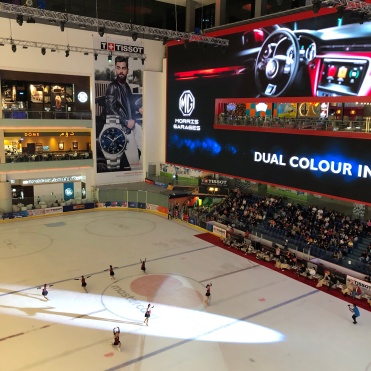 Our favourite activity was not the mall, nor soaking in the pool at our fancy Airbnb or at the cool little beach at ‘La Mer’ that we visited, nor seeing the impressive Burj Khalifa, but the desert excursion we did on our last full day. We did a 7-hour desert dune bashing, sand boarding, camel riding, falcon hunting, dinner and show excursion. Our driver, Yoosuf (not sure how to spell that), was an actual Emirati, coming from the area north and inland of Dubai. I sat up front in the 4×4 with him and was able to chat a lot about the area and the traditions of the region. He told me a few very interesting things about the UAE and its citizens, all before we even got to the fun of the day. 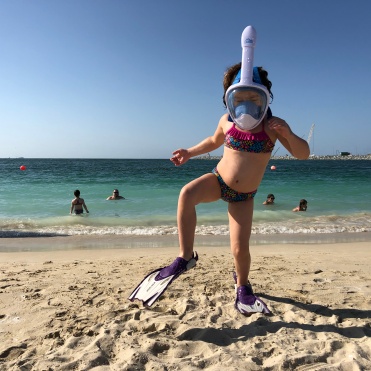 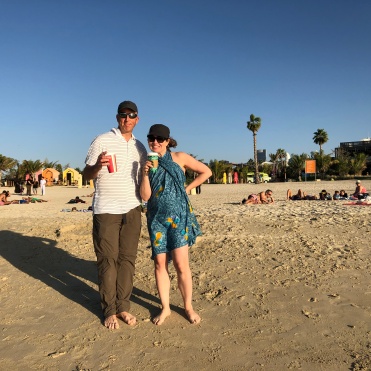 Did you know… that Emirati people are given a house by the leader of their country when they marry? Yoosuf said that every person from UAE are given free tuition at schools and universities, free health care, and a free house when they get married. Apparently, it is so that people have a home to start a family and will contribute more to the society and country if they don’t have to worry about things like that – also it is something that the previous King (or Sheikh) declared he would do for his people. Also, Yoosuf said his people pronounced Dubai like ‘Due-Bay’, not like most people say it ‘Due-Bye’. Needless to say, they LOVE their king!

Ok, now for the fun. We arrived in the desert North of Dubai after a 1.5 hour drive from the city. I think about 1 hour was spent just getting out of the city, the rest driving on sand swept roads through the dry, semi-desolate red/brown/golden landscape. Sometimes their roads get covered with sand and they have to clear them, kinda like snow back home. Funny how areas so different sometimes have similar issues! Arrival at the desert excursion centre was without fanfare and we were left to mingle at a small side of the road market, with no venders, while waiting for the trucks to be prepped for dune bashing. They needed to let some air out of the tires, add a flux-capacitor, adjust the sand spoilers, tune the Johnson shaft, and install the nitro tanks. Once the mods were completed we piled back into our Nissan Patrol/Armada and were off in to the desert in a small convoy of 4 or 5 large SUVs. The dune bashing started mellow enough, with some easy driving up and down small dunes near the start of the track, but that didn’t last long. With our driver half playing on his phone searching for the right soundtrack for our desert adventure, he started to ramp up the dune bashing. Soon we were listening to the traditional sounds of the region while suddenly sliding half-sideways down what seemed like an almost vertical wall of sand. Next we were up the other side, twisting and turning through, over, and around the dunes, holding on as best we could, unsure what to expect next. I honestly thought that the truck would roll over on many of these dunes, but the heavy widetracked SUV gripped and pulled with its partially deflated tires, like a sidewinder cruising through the desert. Some of us, sitting in the middle at the back, admitted to feeling queezy… The dune bashing went on for a good 15 minutes or so – up, over, across, down dunes as we followed what seemed to be a well known path through the sand; yet one that was completely invisible to us! Actually, it turns out that the drivers change their route every day, adjusting to the shifting dunes, just looking for the angles and crests in the sand that they know to be safe, yet fun to ‘bash’. A haunting reminder of the harshness of our desolate environment and seriousness of the job was a turned over and rusting truck just off the dune bashing track. A monument to always understanding your abilities and being prepared for this place. Luckily for us, our driver, who grew up driving in the desert, was very skilled and actually looked more comfortable driving on sand than on the highway. He clearly enjoyed his job so we asked him if he actually pays to do this job. He laughed. A break in the dune bashing was just ahead, where sand boarding was waiting. After snapping a few pictures in the impossibly soft and fine red sand, the group of around 20-25 people took turns sand boarding down a short dune. Our girls were the first on the board, riding it like a sled. Zip, down they went. I was next. I chose to stand – although I think the guide actually expected me to sit as well. He reminded me it wasn’t like snowboarding, when he saw that I was comfortable standing on a board and adjusted it to put my left foot forwards – ‘Just go down straight’ was his advice, as the sand was too soft to allow for turning. I lurched forward off the top of the dune, went into the normal boarding position and zipped down the dune no problem. It wasn’t particularly fast, nor difficult, but was still fun! I think I may have set the bar high, as the procession of people following me each tried, and failed to make it down the run standing up. I think a couple got as far as halfway, but most didn’t make more than a few metres before going face first or flying off the board. The sand was so soft that no one even came close to getting hurt. Marianne ripped down the hill as well, re-invigorating people and thinking it was possible. After a few more people bailed out, we saw maybe one or two other people make it about 95% of the way down the hill standing up. Their board style wouldn’t be called conventional, but hey, it worked! I made one more slide down the hill, and then we were done. Packed up and ready for the next part of the adventure.

We drove from the sand boarding back through part of the dunes, before getting on a main road again. Our final dune bashing was mellow and almost an anti-climatic way to leave the area, but had we done this last bit first, I would have thought it was fun enough! Our next stop was the Bedouin camp in the desert. We arrived into what appeared to be an area covered in Bedouin camps. Our guide thought there were around 50 camps in the area, and with the fleet of buses and SUVs shuttling people from the highway to the camps, I believed there were at least that many. Our camp was mellow at first, a small group of tables right on the sand with a couple of small tents. Right next to the tent was a guy doing a falcon show. A falcon swooped back and forth at the small piece of meat dangling from a rope acting as a moving target. Next to this was a number of camels in a procession. We were ushered to the camels for a ride. Marianne and our youngest daughter on one, me and our older daughter on another. They climbed aboard the camels easily, and silently. The camels barely noticing that they were there. I however, was clearly not who the camel was hoping to climb aboard. As I climb up and sit down on the kneeling animal, the camel lets out a loud ‘Uggggghhhhh’ as if to say, are you seriously on my back right now? Of course this made the girls laugh. Poor camel. Riding a camel is not horrible, if you are used to it – but not the most comfortable thing I have sat on, and the ride was actually reasonably smooth – at least compared to what I expected. The dismount was a bit more dramatic. In order for us to get off the camel, the camel needed to kneel down again. The guide just said to hold on – but gave no indication that we would go from level to about a 60 degree angle towards the head in about 0.5 seconds. I was sitting on the back part of the camel, behind Maëlle, and I was almost launched clear over the front! Luckily I was able to hold on! This of course helped prepare those on the other camels for what was to come. I am sure I heard the camel sigh when I got off, but maybe I was just imagining that! The rest of the evening was good, good food and good entertainment. We watched a fire show, a man that seemed to spin continuously for at least 15 minutes, and of course, a belly dancer! The meal was decent as well. We shared the camp with a few other large groups, but our package included table service – theirs was a buffet style. Either way, the food was tasty, plentiful, and the evening fun. Definitely a great time, and worth it if you have an afternoon and evening to spare in Dubai! It was reasonably priced for all four of us, with transport and food! 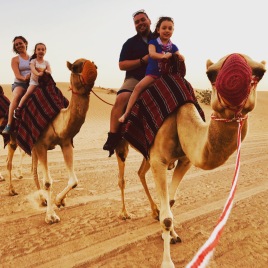 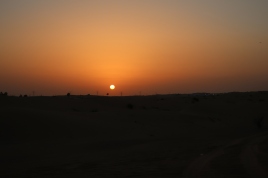 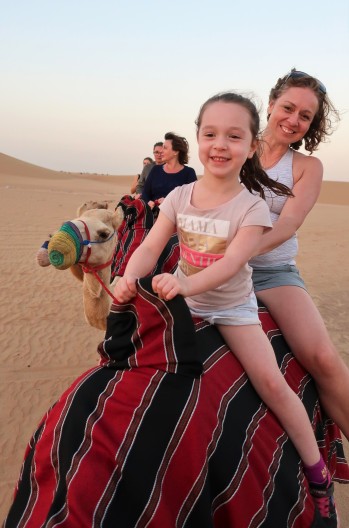 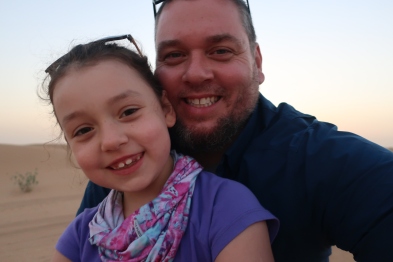 Dubai is a modern city, with all the modern conveniences and of course some of the most expensive things in the world; however, it is a city that has history still embedded all around it, it is people and land. It isn’t the cheapest city, nor the easiest to get around, but in December when it isn’t 50 C, it is a nice place to visit, and was a welcome warmup from our past few days in Istanbul, where winter was coming!

This site uses Akismet to reduce spam. Learn how your comment data is processed.